The Nantahala is often the site of championship competitions, including the 2012 National Youth Fly Fishing Championships pictured above. Photos by Tim Ramey, Fly Fisherman's Corner Photography

The Nantahala is divided into three sections, with different fishing regulations for each.

1. The Upper Nantahala from the dam to White Oak Creek is classified as Hatchery-Supported Trout Waters with no size limit or bait restriction and a creel limit of seven trout per day. Hatchery Supported Trout Waters are marked with green-and-white signs that are posted conspicuously along the watercourse. This is primarily the section along Old River Road. Map

2. The Upper Nantahala from White Oak Creek to the Duke Energy Power Plant is classified as Delayed Harvest Trout Waters, which may be fished only with artificial lures with one single hook (no natural bait). And there are strict seasonal restrictions between October and June.

The Upper Nantahala offers a consistent flow and is arguably one of the most scenic mountain rivers in the nation with its many cascades and waterfalls.

3. The Lower Nantahala, along the floor of the Nantahala Gorge downstream of the power plant is also classified as Hatchery-Supported Trout Waters with no size limit or bait restriction and a creel limit of seven trout per day. But because this is where most of the rafting and kayaking activity occurs, the Lower Nantahala is the only stream in the state where night fishing is allowed.

From March thru October, Duke Energy schedules its power generation operations to provide flow releases for the Lower Nantahala's rafting and kayaking activities. This is the 8-mile section of the Nantahala below the Duke Energy Power Plant.

While the schedule varies from month to month, the river is generally "turned on" mid-morning and "turned off" late afternoon. The Upper Nantahala's flow is completely separate and is unaffected by Duke Energy's releases.

The Lower Nantahala area is well known for its population of large trout, primarily browns and rainbows. The hazards for fishing this area when the river is "on" are the rapid rise of water level, very swift water, and fishing between the kayakers and rafters. The fish are accustomed to the recreational activity, however, so the fishing is not compromised. 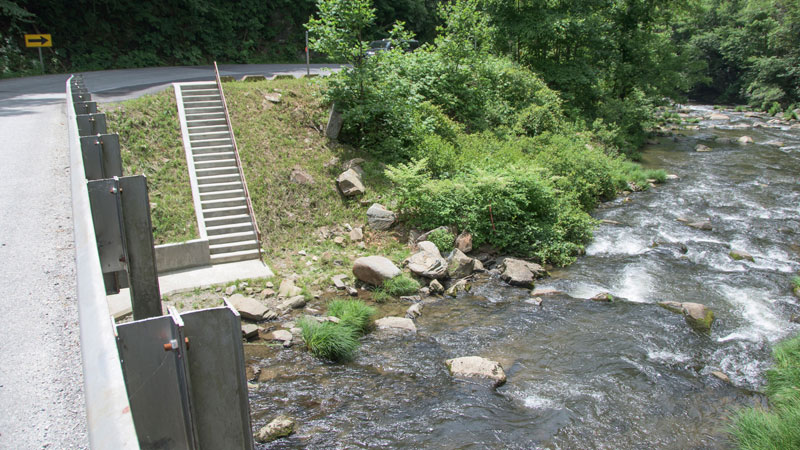 Concrete steps down a steep bank
‹
›

Duke Energy's presence in Nantahala is evident from the large pipe on Old River Road that carries water directly from Nantahala Lake to the Duke Energy Hydroelectric Plant at the bottom of the mountain.

In the past few years, several improvements have made the Upper Nantahala more accessible. Duke Energy recently installed five fish/canoe/kayak access points along Wayah Road. And a community group created Wishon's Fishing Hole – a handicapped accessible fishing pier on Wayah Road about a quarter-mile above the power plant.